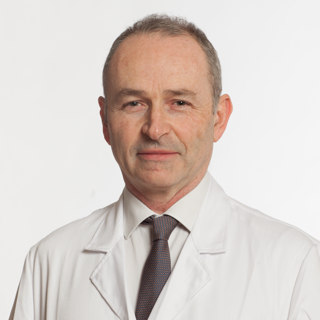 Doctor in charge within the operating unit:

Visit or training periods in other Centers

He performed as a first surgeon 3239 vascular surgery operations (until 31.12.2013) out of 2200 on arterial system (open repair) and endovascular surgery.
In particular he performed as a first surgeon 700 carotid endartectomies, beyond 200 open aortic aneurysm repair (abdominal, thoracic and toracoabdominal), beyond 400
peripheral bypass above all in saphenous vein for critical limb ischemia and other various operations.
About endovascular surgery as a first surgeon he performed beyond 200 endovascular aneurysm repair for abdominal aneurysn (EVAR), thoracic (TEVAR) and toracoabdominal (branched, chimney, sandwich techniques); he performed beyond 400 angioplasties (PTA) for aortoiliac disease, fem-pop and below the knee disease.
He usually performs in emergency endovascular treatment for acute aortic syndrome as aneurysm rupture (abdominal and thoracic) and dissection.
He also performed in collaboration with other department hybrid operations on aortic arch, reconstructions of traumatic aortic and limb injuries.