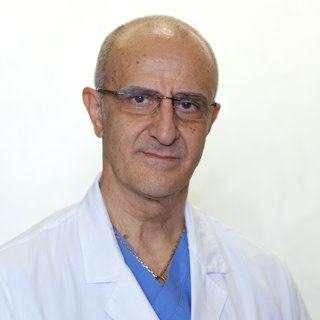 Doctor in charge within the operating unit:

Visit or training periods in other Centers

Since 1987, the year when he began to work in the cardiosurgical department of Bergamo, he dealt with congenital heart disease and starting from 1989, he also dealt with cardiac transplantation and mechanical ventricular assistance, concerning both surgical and pre- and post-operative treatment.

In the field of myocardial protection he collaborated to the improvement and introduction of a continuous controlled retrograde normothermic perfusion technique of the heart during transplantation, in order to reduce cold ischemic time.

He was the first one to describe and introduce such methodology, as well as the first to use it in performing personally the first cardiac transplantation.

From several years he is interested in coronary heart disease surgery, particularly towards the use of arterial grafts for myocardial revascularization.

In Bergamo he introduced the use of the radial artery as alternative way to the saphenous vein in cases where it is not possible to use it or when you wish a totally arterial myocardial revascularization, associating it to the two mammaries.

From 1/8/95 to 31/5/96, during a stage with a role of “supervisor” in the cardiosurgical department of the Catholic University of Leuven (Belgium), under the guide of Prof. Paul Sergeant (one of the greatest international representatives in the field of coronary surgery), he was able to improve his knowledge and surgical technique concerning the extensive use of the two mammary arteries.

From September 1997 he was responsible for less invasive surgery program at Poliambulanza Foundation Hospital. In this field, concerning coronary surgery program without extra corporeal circulation, more than 93% of coronary by-pass (CABG) operations in the centre are performed without using cardiopulmonary bypass.

He carried out an original system of coronary stabilization  and a modified retractor for coronary surgery without CPB through mini-sternotomy.

From the year 2000 he extended his interests to the surgical treatment of permanent atrial fibrillation (AF). In this field, regarding the association of permanent AF and mitral pathology, he performed 48 cases of “autotransplantations” (valve surgery in association with reductive plastic surgery of left atrium with complete isolation of pulmonary veins isolation through heart removal and following replacement) with satisfactory initial results (about 88% of the patients had a restore of sinus rhythm, which continued throughout the following time).

He is particularly skilled and experienced in  conservative surgery of  both mitral and aortic valves. In the operative unit of cardiac surgery of  Poliambulanza Foundation Hospital many patients coming from different areas of Italy are successfully treated with conservative surgical valve therapy. From several years he deals with “restoring” surgery of left ventricle in patients suffering of ischemic heart disease with severe left ventricle dysfunction.  An interdisciplinary  unit named UNISCO (UNità Interdisciplinare per la cura dello SCOmpenso cardiaco acuto e cronico) was also created inside the operative unit of cardiac surgery, in order to  draw special attention to chronic and acute  heart failure.

For many years, he is interested in left ventricle “reshaping” surgery in patients with ischemic cardiomyopathy and severe left ventricular dysfunction. In the cardiac surgey unit directed by dott. Troise a sub-unit called “UNISCO” has been created for the heart failure patients care.

Since march 2011, he has been implanting “sutureless” aortic prosthesis (Sorin Perceval-S). As “proctor” for Sorin Company, he has been involved in the training of several italian and foreign surgeons.